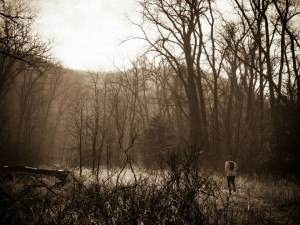 At Zumbro, only two things are certain.

The first is that the trail provides a unique, undulating and variable challenge to everyone running, from the winners to those sliding in under the cutoff.

The second is that there is no predicting the weather. The past three years’ races have featured snow, thunderstorms, and bright, warm sunshine – sometimes within the same race.

However it unfolds, when the Zumbro 100, 50, and 17-mile races set off on April 8 and 9, it will mark the de-facto beginning of Minnesota’s major trail and ultrarunning season in Thielman, Minnesota. And despite the grimacing, the cussing, the mud and the tears, it will be one of the highlights of the year for everyone who’s there, for one simple reason: Zumbro feels like coming home.

Zumbro consists of a 17-mile loop that features some wickedly steep climbs and descents, plenty of tricky singletrack, some high ridgeline running, and even a decent stretch of dirt road. There’s a little of everything.

100-mile runners complete six loops; 50-milers three; those in the 17-mile run (you guessed it) just one.

Only one runner – Susan Donnelly, of Oak Ridge, Tennessee – has finished the Zumbro 100 seven times, doing so each year since its founding in 2009. She’ll be going for eight this year. Meanwhile, there’s a chance one other runner will stay on her heels with a seventh finish: Rochester’s Daryl Saari has six finishes (every year since 2009, except 2014) and will be toeing the line, hoping to make it seven – this year might be his most challenging yet having just completed the Iditarod Trail Invitational 350 Mile Race from Knik to McGrath, Alaska. John Taylor, of Minneapolis, is the only runner with five finishes, and he’ll look to make it six this year.

This is different – the 17-mile might be the most stacked. Leading the way on the men’s side is Ryan Tholen, who won last year’s Wild Duluth 50K and In Yan Teopa 10-miler; The Minneapolite’s range includes wins and second-place finishes at Endless Summer Trail Run Series races (as short as 5K) and second at last year’s Afton 25K.

Potential challengers include Brian Mansky, from Onalaska, Wisconsin, winner of the 2015 Chester Woods 50K, as well as Luke Nelson and Mark Brose, who have shown speed over shorter trail races.

On the women’s side, Maple Grove’s Lisa Trainor will bring experience to the 17-mile race, while relative newcomer Johanna Ficatier, of Rochester, could challenge after a runner-up finish at the Warrior Creek Half Marathon in North Carolina last year.

50-Mile Preview
The 50-mile race seems fairly wide open, from a cursory glance at UltraSignup’s rankings – which has always proven a scientifically-sound method in the past.

Nate Lien, of Blackduck, Minnesota, has top-five finishes at Chester Woods 50K in 2015 and Arizona’s San Tan Scramble 50K earlier this year, meaning he could be in great running shape while many of us have just barely put away our skis and laced our shoes back up after the winter. Zeeland, Michigan’s Jeff Vander Kooi was fourth at the Superior 100 and second at the Marquette 50 Mile last year, with a slew of other podium finishes; meanwhile, Royce Wuertzer and Johnathan Karol come over from the Black Hills with more “mountain” miles in their legs than most of us, possibly wanting to prove that western South Dakota is the upper Midwest’s true trail running hub.

For women, St. Paul’s Lauren Kline is coming off a runner-up performance at the (more) rugged Superior 50 Mile last fall and could be tough to beat. Lakeville’s Kim Martin, meanwhile, finished second at the 2014 Chester Woods 50K, and Mankato’s Shelly Groenke was fourth at both this race last year and last October’s Surf the Murph 50 Mile; both of them could give chase.

100-Mile Preview
This is the first time since 2013 that the 100 starter’s list has not included the name Borst or Hegge, which leaves this race similarly wide-open (though Borst DNFed in 2014, his debut at 100 miles).

Eaganite Joe Boler has run this race before, and we’ll see if his recent marriage to a much faster woman (Kelly Boler, nee Brinkman) has seen him step up his training at all. Rochester’s David Hansen was fourth at last year’d 50-miler, as well as 3rd at the Chester Woods 50K and fourth at the Superior 50 Mile; Steven Bailey, of Afton, has several top-ten ultra finishes from recent years, too, and Hudson, Wisconsin’s Jeremy Eckert was third at November’s Icebox 480.

For the women, it could be a Canadian Coup, as Manitoban Sue Lucas comes south from Dauphin; she won the 150-mile run at Tuscobia in 2015 (and the bike this year), won the 2014 Lost Soul 100 Mile, and was tenth at the 2014 Voyageur 50. Lisa Burger, of St. Louis Park, could be Minnesota’s best hope, as she finished seventh at both the Surf the Murph 50K and Superior 50 Mile last fall.

The takeaway, though, is that 100 miles is a long way, and anything can happen. A newcomer to the 100-mile distance could surprise some people, or an old-timer could muscle through and outlast the young guns, a la Karl Meltzer at Run Rabbit Run 2012.

So – it should be fun. If you’re not running, come down to watch, volunteer, and (very likey) catch the bug to sign up for this race yourself next year.