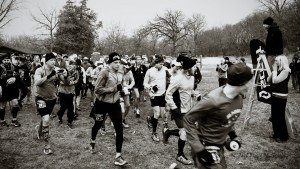 When “Zumbro” first started it was merely a fun-run put on by our long-bearded friend, Larry “the Oracle” Pederson – all I can remember about those early runs over a decade ago and the first few years of the race for that matter were placid, fairly dry Spring days.  Before taking over as director of the race I had the oportunity to run the 100, it was a hot and dry day, I ran without a shirt all day and only a t-shirt at night, in the AM when I slowed I eventually put on a light-weight shell – no big deal.  After last years unforgiving conditions, this past friday’s warm dry weather lulled us into letting our guard down, then Saturdays torrential downpour quickly brought us back to reality, Minnesota Spring weather has turned nasty over the past couple of years and has shown no mercy for Zumbro.  After an entire day of running on Friday we had only seen two 100 mile drops but the early AM thurnderstorms, lightning and hail that greeted us in wee hours of Saturday chilled the field to the bone and claimed its victims one by one – in the end another low finishers rate in the 100 and 50 were observed.  Running swiftly enough to miss all of the weather, Natahan Leehman of Charollette North Carolina sped to the win in the 100 and set a new course record while doing it.  Also setting a course record was women’s winner and 2013 champion April Anselmo (formerly Cole) although she did not have the benefit of missing all of the weather like Leehman.  In a heartwrenching decision my good friend and 5 time finisher Daryl Sarri had to pull the plug on his 2014 race but Susan Donnelly held on for her 6th finish and is now the only one remaining who has started and finished all 6 Zumbro 100 mile races – simply incredible.

Starting at Midnight on Friday (early Saturday) the 50 milers had even less time to warm up before the storm hit and the slowest of them had to run another full two loops after the soaking to get their finsih.  After overtaking the leader around mile 40, Mike Dietz of Wauconda, IL took the win and set a new course record.  On the womens side last years 17 mile winner (and all-day volunteer on Friday) Leslie Semler of Hermantown, MN went on to win the 50 in uncontested fashion placing 1st for the women and 4th overall – since when does Tiger Woods caddy for some recreationl golfers the day before the US Open, oh yeah, I forgot, he doesnt – that is why we have the coolest sport on the planet.

For the 17 Mile, rarely have I seen such an ugly start to a race, huddled in the pavallion until the last possible minute we got the near 200 17 mile racers started just after the hail had stopped but as the storm raged on – as always there were no shortage of smiling faces in the crowd ready for any conditions – inspiring to say the least.  One of my favorite moments was getting message just prior to the start from one of the HAM Radio Operators – “Hunter’s dad is requesting that he not start the 17 mile due to dangerous trail conditions”, we called for hunter and the 14 year old presented himself with his mom, “mam, your husband is requesting that Hunter not start the race”, “what, we can’t start”, “well, I am just relaying the message – your his parent, obviously its your decision not ours – you are welcome to start” – 4 hours and 53 minutes later Hunter and his mom crossed the finish line after 17 miles of what they said was pure fun – go figure, running in the rain and mud won’t kill you.  On the mens side Tim Hardy ran hard (and was even spotted running a cool-down after finishing, now dubbed as “the first cool-down ever run at Zumbro”) placing first for his second year in a row and now owning the top two fastest times on the course – Tim reportedly took a hard fall during the race and got pretty beat up, none-the-less Tim is scheduled the 2014 Boston Marathon just over a week later – h a r d c o r e.  On the womens side Monika Hegley came within seconds of the previous course record – had she known I wonder if she could have produced the needed kick to snipe it – either way, very well done under tough conditions.

As always, we have a full year to forget how bad the weather was and as always the good memories will rise to the top and the cold hard ones will  slowly fade away.  I can’t help to wonder if in our 21st century digital world, have we grown soft – would this have looked crazy 100 years ago when men were men and women were women?  Zumbro the past few years seems to be analogous to life itself, sometimes its ugly, sometimes it’s hard, we do our best, band together and march on, some of us make it, some of us don’t while living to fight another day.  On Saturday morning some folks were at home, warm snuggled in their beds while some of us were getting the rare oportunity to find out what we are made of – where would you rather be?  Just like in life, we don’t always get to choose the conditions but we get to choose how we handle them and I think we all handled them just right, starter, finisher, non-finisher, volunteer and everyone else involved.  Below is a recap by the numbers of how each race unfolded.  Thank you to each and every single runner, volunteer, crew person, pacer and spectator that makes this event what it is each and every single year – we all play an important part.